Spoiler alert & warning! If numbers and number crunching puts you to sleep, please do not read this post! 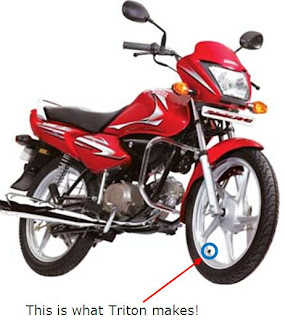 Triton is India's largest manufacturer of tyre valves and cores (yes, those little things that poke out of your wheel rim). It is an OEM supplier to almost all tyre manufacturers in India.

Intuitively, one might think that this would be a very good business due to following reasons:
1) The business requires massive scale. For competition to come in, such scale would prove to be a BIG entry barrier. (Imports, aka Chinese goods would surely be a threat)
2) For a tyre manufacturer (Triton's customer), the valve cost is not a large component of total cost (In FY11, Triton's per unit selling price of a valve was just Rs.14.35). So a small increase in price would not be a huge deal for the tyre manufacturer.
3) Due to all these, Triton should be having pricing power, assured and sticky business and growing customers.
Sounds like a very interesting business and opportunity right? I thought so too and glanced through the company.

Well, the numbers show a totally opposite picture. So this post is not only about Triton but also about the importance of numbers in analysis and investment decision making. I personally feel that a good look at the numbers is very essential to get comfort level while investing in a company.

As a result, the balance sheet has gone for a toss, with debt piling up..

Inventory CAGR (25%) and debtors CAGR (20%) has been much higher than sales CAGR (12%). So every time the company's sales increased, the working capital requirement increased more than the increase in sales, resulting in perennial need of cash for funding working capital.

So what was the cause of all this deterioration? Lets see..

The selling price per unit of Triton's products has grown at a CAGR of 5.2% and 1.7% respectively.

But the raw materials price per unit has grown at a much higher CAGR of 15.6% and 11.5% respectively.

So as raw materials prices rose, Triton was not able to raise its products ka selling prices proportionately, leading to falling margins. In FY04, raw materials consumption was 38% of sales. By FY11, it had become 64% of sales!

Now what will happen if you put more money into the business and expand capacity, but the margins keep going lower? On the expanded capacity, you will earn lesser percentage returns. The return ratios suffer. ROCE, RONW have dropped over the past 6 years.


So what conclusions can we draw from the data?


So, the numbers say that (till now, at least..lets not talk about future right now) Triton is not an exceptional business, has no moat or pricing power of its own and will earn super profits only due to luck (e.g. sudden fall in commodity prices). Well, thats just what the numbers say.. What do you say? :-)

P.S. My apologies if I let loose the 'analyst' in me on all you unsuspecting folks! :-D
P.S. Part 2: This is just a number crunching analysis. This does not reflect upon the quality of management (the Gokarns are decent folks, I think) or what they have managed to achieve in really trying times, over the last 7-8 years.
Posted by Neeraj Marathe at 1:24 AM

Very interesting analysis. I would like to compare this with Suprajit Engineering. The profile of both stocks is similar, largest player of low-value items used in automobiles.

Where suprajit might have scored is on cost reduction front and hence has better numbers.

Will try and send a numeric analysis on same.

Hi Wishbone,
Please do. Although i havent seen Suprajit, a coupla good friends of mine track it. My email for your reference is research.neeraj@gmail.com
As a side-note, Triton is a bit different from Suprajit, Triton is an ancillary to an ancillary! :-D
cheers!
Neeraj

First let me congratulate you for pointing out few imp points about Triton. I have been a past shareholder and fortunately observed the debt pile up and so sold the shares. I will keep in mind your analysis for future reference. Hoping to see more such good ones from your side. Thanks, Janak Merchant

However, let me hypothesize something here. Let's just say for a moment that they had pricing power. How would you determine cheapness then, given as you said, its an ancillary to an ancillary? DCF? Or any other measure? (am a little averse to DCF,so looking for ideas)

Very good analysis bringing out the thought process well. Couldn't we have used Gross Margins to arrive at the same conclusion ?

Dear Anonymous,
Different ways to skin a cat i guess! (I do not hate cats, just to clarify)
cheers!
Neeraj

Dear Purushottam,
Is it? i think the number is correct, but lemme plz recheck..thnx!
Cheers!
Neeraj

The spoiler alert warning at the beginning made me apprehensive of some deep and complex number crunching, but thankfully that is not the case :)

Very nice analysis indeed. However, i have a small query: From where have you got all these numbers boss??

From the AR Manish..whr else!
Cheers!
Neeraj

From their latest AR?

Btw, CAGR calculation for sales doesn't seem to be 12%. My calculaton of 17.4% matches with the Purushottam's, almost.

Yup, just chked it in my excel sht..i think sumthn got screwed while making a picture out of the excel file for posting on the blog :-( blogger allows only picture files to be posted :-(
No cheers! :-(
Neeraj

Sirjee, very nice analysis and just to break the flow of smart comments of all good folks here, I'll pitch in with a dumbo comment; see if you can handle it (variety being the spice and all that.. :)

- How can one get these nice year-wise tabulated data?

I know you said you love to read ARs but I'm assuming there's some system/automated method to get these numbers of past 8-10 yrs efficiently without wasting a lot of time to punch in numbers manually.

Wishbone, if you do, pls cc that Suprajit report to me as well. My email in my handle. I have a very small position in it. Thx.

Offtopic ps: Reg'g yr book advise, the few bookshops I visited (in NewBbay) all stocked only the ghode-ka-chashma-filtered-narrow-outlooking-syllabus-oriented-notes-masquerading-as-books for Fin. Mgmt course of just one semester of BCom. I may have to trek up to the city to find MBA/CA type books you said. Have just ordered the other book you recommended. Thx for yr guidance.

Hi Suhail,
I prefer to input all data by hand myself. i dont use c-line or bloom or any other service..
regarding the book, perhaps u could ask for a book titled 'accounting for managers'..some stuff like this

It is peculiar for component suppliers to report lowest possible margins so as the OEMs are left with little room to squeeze out the suppliers by asking for reduction in prices.
But the above case is just pathetic,why aren't they following cost-plus pricing?

What is c-line or bloom?(Bloomberg?)

And whatever they are, it means, there is a way to get such data by above methods? Maybe some other folk who might be using it can give me some intro-gyaan on this.

I wondering if you would be interested posting a blog on our site as guest. If you are interested, please email me at rajesh@finahub.com

Hello Rajesh,
Nothing spammy about it! I have no idea how the guest post thing works. If the blog you have mentioned is not for commercial purposes, I will have no problem if you paste any of my articles you feel worthwhile, over there. As long as it helps people, I do not mind at all, its ok even if you dont mention my name/blog address.
My email is research.neeraj@gmail.com
Cheers!
Neeraj

Thanks sir. Learnt something new today. C-line demo is q. appealing but w/sticker price of dedh peti I think I'm not ready for it yet. Let me get through the books first then I'll see :)

Sure Suhail,
Purushottam and Minish, i have edited the CAGR numbers Sirs..
cheers!
Neeraj

THIS IS WHY IVE LOOK AT NO.S FIRST...WE LL THINK ABOUT THE BIZ LATER APPROACH!
I DUNNO Y BUT THE GOLMAAL SONG IS PLAYING IN MY HEAD ,UR ASSUMPTIONS SEEM PRETTY ALRIGHT CONSIDERING THE KINDA BIZ IT IS, (THEN AGAIN I MIGHT BE WRONG)....JUST WONDERING HOW DID THEY GET STUCK IN SUCH A SCREWED UP SITUATION...EITHER V R IN THE COMPANY OF INEFFICIENT BIZ MANAGERS( A.K.A EITHER STUPID OR REALLY UNLUKY!) OR I REALLY DUNNO ANYTHING BOUT BIZ AT ALL
WADDAYA THINK?

Hi,
Conditions/situations might have forced them to go down this path..no-one will do it willingly of cors..
cheers!
Neeraj

Hello Neeraj,
Nice analysis. I wasn't able to find their ARs on their website. Can you share where you found them?
- Harsha

Excellent analysis although I am bit late to the discussion.

The Qn is of course being the biggest in this area, just why is it that they don't have pricing power? Especially since their products are only a small part of the costs for tyre manufacturers? Assuming constant capacity, does it mean that this can easily be substituted with imports? Or can the tyre manufacturers go to say 50 different small players instead of 1 big player?

Hi Harsha,
FY10 and FY11 ARs are on BSE..i got the ones before from a subscribed site..i will email u the details/ARs if u wana..
cheers!
Neeraj

Hello Feltraji,
I 'think' its coz of chinese competition, but i am not at all sure as to the reasons why. I have not talked with the management as well, so cant say for sure.
cheers!
Neeraj