Bharat Bijlee (BBL) is one of the oldest transformers companies in India with a very conservative and respectable, but very secretive (!) and closed management. (I know..I have been attending the AGM for the past 3 years) The present financial position of the company is as follows:

The profits one sees in the results include exceptional items, which need to be disregarded to know the real position of the business.

BBL manufactures sub-station transformers upto 220 KVA, with an installed capacity of 13380 MVA. BBL is also into manufacturing of electric motors, gearless machines used in various industries. The company also has a business segment for executing substation projects on turnkey basis. Please check out the AR here and the September quarter numbers here to get a feel of the two businesses of the company.
The past two years have been really bad for the transformers sector. Overcapacity, rise in costs and reduction in Government orders have hit the sector extremely hard. The performance of all transformer players like BBL, Voltamp and TRIL has deteriorated and so have their stock prices!
BBL's transformers business is no exception and in fact, in the June 2011 quarter, the transformers division reported losses, with the September 2011 quarter being just a shade better. In a normalised environment, BBL's transformers business does Rs.500 cr of business on existing capacity, with 10-12% operating margins (upto 20% in really favourable scenario) and 7-8% PAT margins. But, I do not expect a favourable environment for the transformers sector for the next 3-4 quarters at least.
The electric motors division, however, is reporting healthy numbers both in terms of topline and bottomline. Margins are in healthy two-digits, with the management taking active steps to improve the business, as evident in their actions mentioned in the AR as well as the last 3-4 quarters' numbers. Here , sales growth of 15%, 12% operating and a 8% PAT margin is very much achievable.
The very positive factor about BBL over the last 3 years has been its cashflow. In a challenging environment, where competitors' cashflow has been hit worse than their margins, BBL has shown consistently high cash generation. (Numbers in Rs. Cr)

Anyway, coming back to the earnings perspective, I expect transformers business cycle to turn-around in FY13, with players making normalised margins again. BBL's electric motors business is showing decent traction and continues to grow (segmental margins (17%!!!) have shot through the roof in the September 2011 results)
So lets paint a scenario here, for FY13 numbers. (Please note that I am totally allergic to formal analyst-type 'projections'. Whenever I try to get a feel (i will desist from calling it projections) of future earnings, simplicity and conservatism are the things I give utmost importance. So what you see here is merely a reference point and is in no way, fairly accurate, imho!) 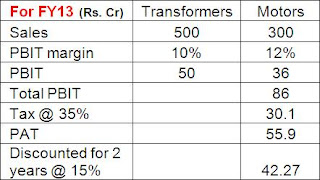 So, can the business do Rs.56 cr of PAT in FY13? (which is Rs.42 cr of earnings in today's terms) I think the probability of that happening is quite high. Also, please note that I have not at all considered the 'other income' on investments, which is fairly high for the company. (Rs.14 cr for FY11)
Valuing this at a low multiple of 8x yields a valuation of Rs.336 cr.


Now come the investments! BBL has the following investments at present (FY11 end)..Number of shares are also in crores..dont mind the decimals :-) 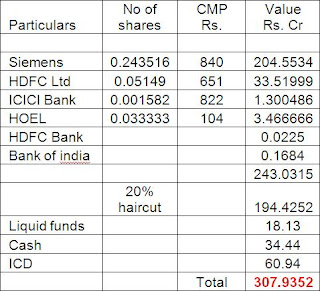 I have taken a 20% haircut to the market value of equity shares (One may take a higher cut for more depressing valuation!!) So, that works out to another Rs.308 cr.
BBL holds these shares since ages and usually, I wont value them at market value, since the company did not intend to sell them. However, in FY11 as well as Q1FY12, the company has sold some shares of Siemens, which is why it makes good sense to me to now consider the market value of the investments.

What I intend to do

1) The company is going cheap for sure. If one compares this with Voltamp, which has about the same transformers capacity (but not same types of transformers), one will realise the 'relative cheapness' of BBL. However, since there are very few relatives whom I like, I never walk down this road! :-) (I have not included this 'peer comparison' to keep the length of the post respectably short!)
2) However, for a cyclical, which is not exactly going through a rosy period right now, the valuations are not dirt cheap and the discount is not high enough.(although you may argue that in the first place, the calculations supporting this 'discount' do not appear accurate, like 'projections' do..well, i do not mind the inaccuracy, as long as i am inaccurate by being on the lower side) Anyway, so I do not intend to make any haste in buying this one. If it drops nicely, nice! If it doesn't, better to move on to some other company.
3) I do intend to keep close watch on the company. Last year, the management passed an enabling resolution to raise upto Rs.400 cr debt. Do they intend to expand lots? Do they intend to start a new business line? I would like to see what they do and how they progress.

All in all, nothing electrifying about it, which would make one ogle and drool.. Hope that time comes too! Till then,

Cheers and happy investing!
Posted by Neeraj Marathe at 2:29 AM

The company has sold Siemens only in buyback offer. Will they ever sell in open market.

So should we take a much bigger haircut ?

Hi Sameer,
I hvnt looked into Nesco fully yet, but you might wana take a look at Nooresh Merani's post on Nesco, on his blog..
cheers!
Neeraj

Hi Neeraj,
Whats ur view on Nesco from long term perspective?
Management has been reluctant to share cash generated, with shareholders through buyback/dividend/etc. Is management acting sensibly by retaining cash. I think they have more than 100cr in cash/mf whcih can fetch less than 10%. Why then not distribute it to shareholders which they can deploy in high ROE business at reasobbanle valuation(this case is something like Piramal :)

Sameer,
as far as i know, the company will be expending a large some of money (200 cr) for construction of one more IT building..do watch a recent management interview on moneycontrol..so i dont think they will pay out large amount as dividend.
cheers!
Neeraj

DO you think is this right time to start accumulating Bharat Bijlee? Also what's your take on sugar stocks?

Hi Salil,
I would prefer to wait for the Dec quarter results. The conditions in the sector are not great at all.
Sugar, virtually no idea. I am nibbling in a coupla stocks, leaving room to add on the downside.
Cheers!
Neeraj

Do you have any idea about how Bijlee's products stand vs competitors (MNC's/indian co's)on technology?

I doubt if they have any technological edge...but are they more or less in line with the bigger competitors both in transformer and motors division?

Also since you have been attending the AGM's...how does the management looks to you? Are they focused/ambitious? I dont have much doubts about the integrity of the management but they have been considered (maybe unfairly) to be a bit slow in pursuing growth opportunities.

ps: an interesting piece of info is that the founder of Voltamp was an employee of Bijlee about 50 years ago before founding Voltamp!

Hi Anonymous,
In terms of technological edge, i do not think they have any. in fact, newer players like TRIL have gone ahead of them in terms of technology! its just that due to being in the business for so many decades, i think they have gud recognition.
Mgmt is very closed. they do not answer genuine shareholder queries. the approach of considering other shareholders as owners is absent. that attitude itself is not there in the mgmt i feel. and i think they have been rightly considered to be slow..they really are..
and the info was really interesting. thnx :)
cheers!
Neeraj

Hi Neeraj,
Whats your take on latest march result.Here also they had shown some other income,though details will be there in AR only,abt which stock they sold.
Regards.

Hello Hemant,
Very decent numbers, i feel..and the other income might not be due to sale of any investment, but could be just return on investments..
cheers!
Neeraj

It has reported a pathetic operating loss for first half of FY 13.

Now what do we do?

So the business is going for 100 cr but the profitability (w/o exceptional items) was slowing down drastically and now has turned into a loss.

This is by no means a quality business. I am saying this particularly because the AR has nothing interesting on growth, innnovation, etc that would give an owner confidence that the business wants to grow.

Rather due to its stash of investments, its a cigar butt but with a few puffs left.

Hi Anon,
A cigar butt kinda thing becomes very risky if the basic business is deteriorating. Over here, the pain is continuing, much beyond what i had thought earlier. which is why i was always of the opinion that there is no need to jump into this, even though it may LOOK cheap.
One always needs to look at the business, on a continuing basis, and not just at the numbers and valuations.
cheers!
Neeraj