There will be some people who will surely run away after seeing that Phillips Carbon Black Ltd (PCBL) is a RPG group company, hence the warning! :-) Also, please read my disclosure at the end of this post.

PCBL is India's largest manufacturer of Carbon Black. It is also the largest exporter of carbon black in India, deriving around 20% of its revenues from exports. The company has three manufacturing units with an installed capacity of 2.7 lakh MT, as shown in Fig. 1.

Carbon black is basically a black powder, used as a reinforcing agent in rubber. The tyre sector accounts for more than 60% of the carbon black consumption in India. The principal raw material for carbon black is carbon black feedstock (CBFS), which is a crude derivative. Hence, its price is always pegged to the price of crude. (Fig. 2)

Consider the following points about the carbon black industry in India:


Sounds cool? So what is PCBL doing to take advantage of this situation? 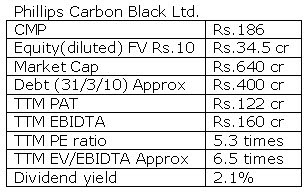 PCBL is currently valued by the market as given. One can check the detailed financials of the company here. The trailing valuations surely look cheap. With the expansion expected to be operational by the end of this calender year, the carbon black business can do close to Rs.190 cr operating profit for FY11. (Assuming 2.8 lakh MT sale @ Rs.50000/MT and operating margin @ 13%). All the figures have been taken on a bit lower side, to be conservative.
The power business, on the other hand, is an even better story. By the end of next year, PCBL will have operational power capacity of 70 MW against 44.5 MW currently. Out of this, about 30 MW would be used by PCBL and the remaining 40 MW would be sold to SEBs. When the company starts generating power at full capacity, the operating profit from the same could easily be more than Rs.100 cr.

Surely sounds like a steal? Well there is some stuff I am afraid of:


To sum-up, PCBL is currently in a sweet spot, with decent visibility of revenues as well as profits over the next two years. The EPS growth could also be accompanied by a PE re-rating, once the 'power story' of PCBL gets marketed well! ;-) On the basis of current as well as forward valuations, the 'bright future' does not seem to be priced-in at the present market-cap..
Cheers and happy investing!!
P.S. : Investing in commodity companies is risky. Investing in a RPG group commodity company is, therefore, risky-raised-to-two. So, considering the illustrious history of the RPG group, I have yet not had the guts to invest in this company. I do not have any position in PCBL.
Posted by Neeraj Marathe at 12:02 AM

sir, PE AND EPS calculation is difficult as this involves carbon credit also....carbon credit is the nxt in thing ......moreover crude movements have to be predicted for a exact valuation.....

Hi Sreenath..
"carbon credit is the next in thing"..well lemme tell u Sreenath, its not..carbon credits trading has taken a huge hit and so have their prices.
to be on a safer side, i wont consider any income from carbon credits in my calculations..if it comes, gud..if it dsnt, no probs, since we were not counting on it anyways..
cheers!
Neeraj

SIR, i happenend to get hold of magazine in our college which told auditing details of this field..came to knw that the field is still "RAW" as rules are not clear..finallised would be the right term...this shows the raw.new ...born...nature of the field..

the despute was to put it in goverment grands......as20....or...trading ...etc..so once company's add this to their profits ....and the credits will be traded freely such companies would have credits and new products which will help per yield per investment more

Yes Sreenath,
Accounting for carbon credits is a grey area no doubt..plus, the trading itself has taken a big hit..better not to concentrate on this aspect of the company, to be on a safe side..
cheers!
Neeraj

Is Carbon Black used in Shoe making, i think my Reebok Shoes have a sole of carbon black.

Hi Ani,
Carbon black is used as a reinforcing agent for rubber and finds applications in a variety of industries..(biggest is tyres)..
So if ur shoe sole is rubber, there could be carbon black used there..
cheers!
Neeraj