"Research Analyst"... Probably the best profession in the world! Here's why:

Research analysts are known to have gone phenomenally wrong (and occasionally, phenomenally right) on the investment advice they dole out. Of course, there exists a big conflict of interest, since most of the analysts are employed by brokers. So the basic objective of their research is to generate brokerage for their employer, and not necessarily the welfare of investors! ;-)
Anyways, enough with the pointless analyst-bashing, partly because i am an analyst myself!
The purpose of the post is to discuss the phenomenon called 'analyst bias'. Now, this affects all investors and not just analysts. So it makes sense to know about it..

The logical thought process of a research analyst: 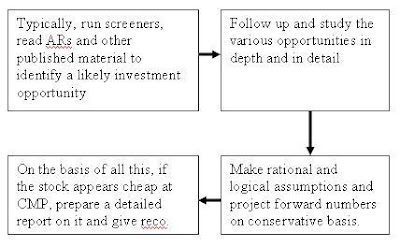 Now, lets look at the thought process of an analyst affected by 'analyst bias': 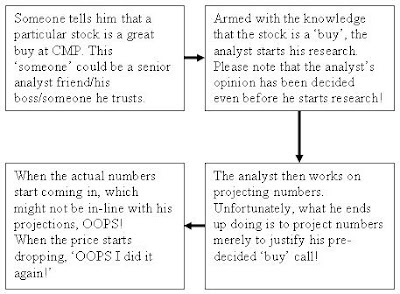 I do not mean to demean analysts per say. Unfortunately, even though this affects all investors, the phenomenon is called as 'analyst bias'. Think about it..how many times have we bought stocks, just because someone gave us a 'tip'? And afterwards, we end up rationalising our decision one way or another.

So how to escape and guard against analyst bias? One very logical approach is to do original research, filter away the noise and ignore 'tips'. Another way is... 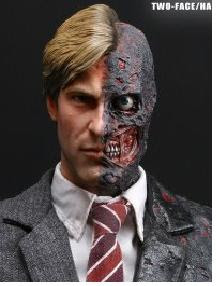 Remember this handsome gentleman? For those of you who are not into movies as much as i am, this is the character 'two-face' from Batman: The Dark Knight. He can provide us with an answer to our problem!

Don't get me wrong. I am not asking you to become disfigured, yet cool! :-) What we need to learn from this is about having a bit of 'split personality'.

What if we do this.. For any company that we think is a 'buy', we prepare a 'sell' report on it! I agree that this is extremely difficult, given our natural thinking patterns and biases. It takes time. So the next best thing is to ask someone (some friend, maybe) to give as many 'sell' points for the company as possible. This would help us come across points and arguments, that we might have unknowingly ignored, since we considered the stock a 'buy'. This would help broaden our view and take better and informed decisions.

So there is a lot more to movies than just entertainment after all!! Psychology and behavioural finance are absolutely fascinating and i intend to post more on these topics. Hope you will enjoy them as much as i do.

cheers and happy investing!!
Posted by Neeraj Marathe at 1:15 PM

loved the three points you listed. this is perhaps the only profession which has no accountability.

Well said Neeraj. Indeed we all need different perspective to look into this age old problem of 'analyst bias'. Your out of the box thinking has given 'all' investers a new direction. Thanks...

Neeraj
first comment is by TIP guy not me..

Wups..
sorry..TIP guy, somehow i got confused..my bad..
u have a fantastic blog..i urge readers to visit it once. TIP guy is extremely meticulous, has excellent thought process and, i believe, is a really good investor. http://www.tipblog.in/
Cheers!
Neeraj

Nirya, interesting point. Agree on point no 1. But I will beg to differ on point nos 2 and 3, especially wrt the institutional research isde.

Pt 2: No penalty / answerability: Institutional research analysts are indirectly paid on the basis of client votes awarded to analysts - and this is in turn linked to a number of things such as the quality of research, different view points / arguments offered and the consistency of the accuracy his calls. If the analyst has not done justice to these parts he gets booted out - so there is accountability to clients and his own boss of course.

Pt 3: Earnings miss/beat: Is it really that easy to forecast earnings for a company? Lets take an example of a single product company - lets say the analyst was dead right about the revenues - but is it practically possible to forecast what operating leverage the company would have generated? And this is just one factor - there are so many other factors at play - input costs, labour hours worked, product mix, product pricing and the list carries on. Tell me one soul in the world who can get all these variables right. If a single product company is that complicated, how can you expect analysts to get all the variables right? HELL not even the company management knows abt it until the MIS report is prepared!

No ill feelings meant - just wanted to put my perspective (which ended up being rather long).

Hey Al,
Really nice to hear from u man...luks like i really hit the analyst in u, with this post :-)
Firstly, this was written in a lighter vein, plz dont take it sooo seriously..
Regarding accountability, i agree with u that in a lot of firang broking houses, incentives are based on the accuracy..sadly, in India, it is not the case.
Regarding projections, i totally agree that it is difficult, if not impossible to project numbers for some 25 yr old who has never been in business. thats my point! if he goes wrong in his projections, then who is to blame? Company has underperformed? or he has!!
Hope u got what i am saying ;-)
Cheers!
Neeraj
P.S. We'll fight much more once u come to Pune :-)