The purpose of this post is to discuss only the valuation of the said company. I have not discussed the company's business strategy/its expansion plans/sector prospects or any such criteria. In the process, I would also like to discuss 'valuation' as a general concept, not specifically related to this company.

Some stocks in the market are cheap..others are CHEAP.
Aditya Birla Chemicals (ABCL) probably belongs to the latter category.
Aditya Birla Chemicals Ltd is a chemical company belonging to the Aditya Birla Group. (I think that was the least-value-adding sentence ever! :-) )
ABCL's main product is Chlor Alkalies (chlorine and caustic soda). One can have a look at their products here.

ABCL is valued by the market as follows:

"Results of the quarter ended December 31, 2009 has been effected due to annual planned shutdown of power plant taken in the month of Nov´09."
One should take this factor into account while looking at the trailing valuations.
Seems cheap huh?

Well, if you had invested in this company on 26/04/2006, you would have made a total (not compounded) return of 32% in the last 4 years. Now, i am a very conservative fellow, but this kind of return would not excite even me! Dont get me wrong, I really do not care about a stock's historical price movement.. this was just to give you a perspective. :-)

Now let us look at the company's historical performance. I have tried to list down basic financials, which can give us an idea of its past performance. 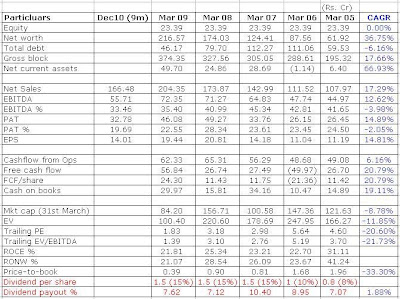 Growth: ABCL has shown consistent growth over the past 5 years.
Cash-flow: ABCL generates a decent amount of cash. This has led to the entire growth being financed through internal accruals over the past years. The company has not diluted capital and has, in-fact, repaid debt consistently.
Margins: Being a commodity business, margins can fluctuate. 35% operating margins can be considered as normal. (Margins are higher than its peers like Gujarat Alkalies and Chemicals)
Valuations: Extremely low, consistently! The market has neither fancied this stock, nor given it decent valuation ever.
In fact, it can be observed that, over the years, as the company has improved its financials and performance, it has become cheaper!!! 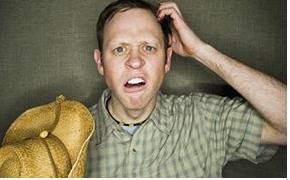 So whats wrong? Why is Mr.Market giving this company such pathetic valuation?
Now I agree that a commodity-type business will never get high valuation, but should the valuation be this low?

Let us look at some typical factors which lead to a company being accorded very low valuation: (My comments are in red)


Well, then, what could be the reasons for such low valuation being accorded to the company? It is pertinent to note that these valuations have been depressed for years together, not just in the recent past. More importantly, how long do you think will the company keep on getting such low valuation?
Questions questions!! Is there a clear answer? Well, i invite readers to contribute their thoughts, to my thoughts! I am a firm believer that valuation is more art than science and such discussions add great value.
Looking forward to your comments..
Cheers and happy investing!
Posted by Neeraj Marathe at 2:14 PM

Nice write up. Had this stock earlier.

Will do a re-check on this one.

Thnx Ayush,
Would love to hear more from u bout it..
cheers!
Neeraj

Hi inquisitive stranger,
Yes ABCL could be a safe and secure longer term investment. I am thinking of writing another post on it, where i will discuss the business of the company too, not just the valuations..
cheers!
Neeraj

They have no pricing power.
As munger says...its better to pay a reasonable price for a good business than a low price for a bad business.

This could be a value buy definitely not a long term buy...but one needs to look closely at their contingent liabilities before taking any decision.

As munger says it is better to pay a reasonable price for a good business than to pay a low price for a bad business.
This business has no pricing power...all in all it can be a value buy but definitely not a long term buy and hold kind of a stock.

LGB has around 83crores in contingent liabilities in the form of corporate guarantees given for others and around 23crores worth of contracts remaining to be executed on capital accounts. Is this something to be worried about?
Also should one just accept the claim by the company that it has 60% market share? though it seems that they are the only player in this market how can one ascertain their market share?
tube investments claims to have around 30% market share but i m not sure how much share the disorganised market accounts for?

I am as confused as you regarding why this company has remain undervalued over the years....Great ROE, debt equity ratio, EBITDA margins, good earnings growth, no equity dilution, honest management and most of all, its cheap (market cap.)....I think patience is the key here...There is no point justifying something just because it has not happened....I plan to hold on to this stock with the conviction that the market will recognize it soon

Hi Anonymous,
I agree with ur thoughts..
Cheers!
Neeraj

hello all,
This stock is now trading at 64. is it a good long term buy?
Milind

Milindji,
After writing this post, certain things have changed about the company. They have made a rather large acquisition, the results of which are yet to be seen.
Plz keep that in mind.
(I do not have any position, neither am i buying the stock)
Cheers!
Neeraj

Isn't it great that you never jump at reallly great looking investment opportunity :-)

In hindsight, this stock is a reminder of the fact that if the opportunity looks too good, then market might know something that we don't.