Yesterday, I watched (again!) one of my all time favourite movies The Prestige, a masterpiece by Nolan. Hence this post!
Think about it, investing is indeed like magic. We make money out of virtually nothing, there are a lot of things about investing we do not understand/cannot logically reason.. and its so much fun..everything just like magic! :-)
So lets try and see how investing is like magic! 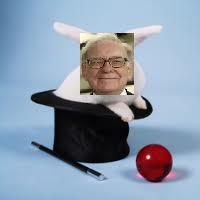 Every great magic trick consists of 3 parts or acts: (no prizes for guessing where these lines come from!)
The first part is known as The Pledge. Here, the magician shows you something ordinary like a 'normal' deck of cards, etc. He might ask you to inspect it and ensure that is just an ordinary piece.
The second part is known as The Turn. Here, the magician takes the ordinary something and makes it do something extraordinary. Now you are stunned and are thinking 'how did that happen'. But you still wont be clapping. Making something disappear is not enough. You have to bring it back.
Thats why every magic trick has the third and hardest part, called The Prestige. What disappeared now appears back in the most unlikely place! Thats where the applause starts!
Every great investment consists of 3 parts too:
The first part is The Research. A thorough and comprehensive research to determine the true value of something. Something which might look like an ordinary company, but may, actually, be extraordinary.
The second part is The Buying. Proper research and proper conviction results in proper buying! Buying and tracking its performance and various other developments is most important. Keep tabs on it patiently as the ordinary starts becoming the extraordinary. Stock price goes through the roof. However, that is not enough. Applauding notional profits is just like explaining the importance of capitalism to communists. Its useless!
Thats why every great investment has the third and the hardest part, The Selling. Its not until you have sold have you made profits!
See, just like magic! :-)


Every magician takes advantage of the obvious. The most complex illusion is based on the most simplest of 'tricks'. Like a trap-door in the stage to make the magician 'disappear'. If you learn how that trick was performed, you will say 'o that should have been so obvious'. But while watching the trick, you never realised it!

An investor does the same thing. He tries to catch the obvious, which others have missed. The market misprices stocks; an intelligent investor recognises and grabs it. After some time, the market starts valuing in properly, resulting in increase in price. And other people say..o that was so obvious..why didnt we buy that time?
Magic indeed!
Magic is fun! Sad magician..or boring magician..just doesn't sound right huh! When a magician performs his tricks, he too seems to have as much fun as his audience. The best part is..its fun even when a trick fails and a magic act becomes a comedy act.
Investing is fun too, believe me! Its a constant circus happening all around us 24x7. And just like magic, its fun whenever it fails too.. its hard to admit mistakes and laugh at one's own stupidity, but believe me, its fun! And most importantly, you get to learn sooo much from the mistakes.
Magical eh!
Magic is dangerous. Magicians have died trying to do the impossible. Trying to take unwarranted risks. Trying to do illusions without having proper checks and controls in place. Magic can become suicidal very fast if the magician does not know what he is doing.
Investing is dangerous too. People lose their money, their house, their happiness and peace of mind. It happens when they take unwarranted risks. When they speculate and punt without having proper checks and controls in place. The stock market is the best and surest place to incur losses if the investor does not know what he is doing.
Be careful with magic!
So, what say? Investing and magic go hand in hand huh! Hope you had fun reading, coz I had real good fun writing!


P.S. This is meant to be a light, fun read. If you think I am going bonkers, thats quite ok! Relating diverse disciplines is something I honestly enjoy doing. But if you liked reading this, you might also like reading another post of mine.
Posted by Neeraj Marathe at 7:47 PM

to be honest ,investors deserve every paisa of profit that they get...it is almost no different as you would expect in a privately owned business...the barriers(a.k.a risk) which come between us and our returns are high enough as it is.
on an unrelated note a prime example of the difference between price and value
http://www.youtube.com/watch?
v=pMz_sPs11HU
enjoyable post
p.s. the best part of the prestige was probably the insane ending

Excellent post! I also loved The Prestige. It's a wonderful movie. You might also enjoy The Illutionist.

Hi capitalism lover,
The link you gave does not work.
Neeraj

Hi Abhishek,
Ya man, i totally love the Illusionist too.
Cheers!
Neeraj

Excellent article. Thoroughly enjoyed reading both this one and the animals one.

The Prestige is indeed an excellent movie from the master, Nolan. Loved your unconventional post.

'What the wise do in the beginning, fools do in the end.'-Winston Churchill

From last week only i have started following your blog .... I know the magic way of your teaching (SAPM) and can feel the same in this post.Hope to see more of these types of reports + research reports from your side.
Thanks for sharing

Dear Sir,
What are your views on Titan Ind. If someone holding from very long (10 years+), is it a time/price for investment sell. OR titan can still give reasonable return for couple of more years from here onward. ( From CMP)

Dear Kishorji,
Sorry, but I have absolutely no view on Titan. Have never seen the company.
Cheers!
Neeraj

Hi Neeraj,
Titan is currentely darling of everyone on dalal street and valuable investor like u saying don't track it.
I guess u r not comfortable tracking it as u know something that is not sharable in public :)

Hi Sameer,
I have honestly not seen it, theres nothing super-secret which i know or something like that..
cheers!
Neeraj

I practiced magic all the way through grammar school, junior high school, high school and even college. No one knew I did magic. I just practiced when I was alone in my room. Occasionally I would do something for my mom and dad. Every now and then, we would have company over and my dad would say, ‘Hey, do the thing you did the other day.’ However, I never performed in any public setting. I loved magic so much I did not want to find out I wasn’t any good at it, so I kept it as my secret. It was probably my biggest secret and I kept it a secret for a very long time.
When I was 21 years old my father took my mother, my girlfriend and I to the Shrine Auditorium, in Downtown Los Angeles. That night they had a live stage show including a famous magician who had just flown in from Japan for his début in the United States. That night I did not know him. Today I am grateful and honored we are friends. - excerpts from The Charm by Gus Searcy.
http://www.thecharm.info/toce.shtml#Magic
like us on facebook at https://www.facebook.com/thecharmbookfollow us on twitter at https://twitter.com/#!/thecharmbookor you can visit our website at www.thecharm.info