Although I have never tracked this company, I am writing about this because;


Today's Writing Products is a BSE-listed company. It has recently managed to perform a herculean task. In its September 2011 quarterly results, the company has managed to report a net loss of Rs.68 crores, on net sales of Rs.15.5 crores (seriously! there is no decimal error here). I agree that making a loss of more than 4 times your sales is rather difficult, but Today's has managed to do it.
The operating business itself has reported a loss in the quarter. But whats more interesting are the 'exceptional items' in the result.. 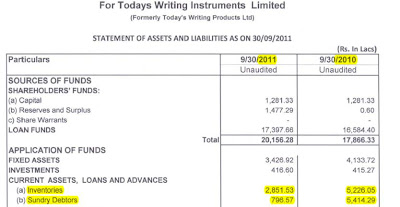 Ok, entertainment apart, a few questions come to mind..
While analysing companies, we all analyse numbers quite a lot. But its also important to look into the fact whether the numbers make sense. Whether the numbers are supported by proper tax payments, proper dividend payments and proper cash-flows.
Cheers and happy investing!
P.S. Today's is in a very sorry state. Deteriorating business, directors quitting, jazzy announcements which never saw the light of day, shares pledging, reducing promoter stake, corporate debt restructuring..it has it all. Better to not even look at it..
Posted by Neeraj Marathe at 12:58 AM

But then, you are looking at this in the wrong way...Inventories have reduced, Sundry debtors have reduced...this is fantastic. Forget the rest of the Annual Report. This co. is trimming its balance sheet. Invest!!

Please don't :) Great find - this will probably come under 'how not to run a company' list.

It also forces you to think - which banks lend to such sort of a company? (173 cr man!)

LOL,
I 'think' you are being sarcastic about investing in the company, but just wanted to confirm! :-)
Regarding the bankers, one of them was HDFC! (of all the banks) they went ahead and filed a winding up petition against the company! The matter is now with IARC..
cheers!
Neeraj
P.S. If you want to add one more name to your 'how not to run a company' list, do look at Blue Bird..its a company based in my town Pune...had a fantastic brand name..

Excellent Post Neeraj. These type of real examples ensures we really look just beyond the numbers to really understand what is going on in the real businesses.

As per unconfirmed rumours the company has approached RoC for approval to change name to Yesterday's.

On a serious note, you mentioned Blue Bird from 'Punya'nagari. After the IPO, they also did QIP with LIC!

These are all eye openers for investors. It's expensive to make these mistakes yourself. Let's learn vicariously.

Haha..."yesterdays" was good! trust the Kulman to always bring up something like this!
And yaa Bluebird has beaten investors black and blue!
cheers!
Neeraj

Once during one meeting at my place one banker told us that there is no such thing as a sudden NPAs in banks.

Same way, Todays has been manipulating its accounts since many years. This was brought to my notice in 2008 by one CA.

Todays competitors once told me that there was no competition fro Todays!

Gotta b v careful in investing. Stock Market is an expensive place for people who do not know what they are doing. There is no free lunch anywhere.

Expecting wow articles to continue from your side.

Absolutely agreed Janakbhai..
first-hand info, like the one you mentioned is most useful too..
cheers!
Neeraj

Thank you for the comment JK.
But you might notice that I had already mentioned Bluebird for the very same reasons. The entire mess bluebird got itself into was actually very much decipherable from the company's ARs itself. But still some people put money in it just because the price dropped a lot, thinking there is value in it. Unfortunately, the value hasnt materialised.
Anyways, i think you totally missed the purpose of the post. It was not to show who makes biggest loss on smallest sales. Its not a competition. There would be tons of other examples in the market, where the proportion of loss to sales would be even more ridiculous than Today's or Bludbird.
Neeraj

Times have changed and any stock can go down 80-90% from your buy price if you select wrong management. Number crunching/Ratio/cash flow etc any one can calculate but only experience can teach you which promoters are genuine. If you are NOT with genuine management you could be thrown out from market altogether any time.

I remember sometime ago an auditor had commented on an annual report of a similar co that "the company is not a going concern, it is a gone concern". Quite apropriate for Yesterday, Today & Tomorrow.
:-)

LOL...an auditor with a sense of humour..quite rare, dont u think?!
Cheers!
Neeraj

Hi Sameer,
Looks like you track a huge number of stocks..currently i am working on Nesco. It is a very very interesting case for sure..
Bharat Bijlee, in my post also i had talked about it as something to look at on steep declines..dec results would be quite 'interesting' to see, i am waiting for the same.
IRB infra, 20k cash by 2020 is great. I do not have the vision to predict things 10 years away, so i will give it a pass.
Also, one request. I really appreciate your comments, but if you have any comments which are not related to the topic of the post, plz email them to me, instead of putting them up on the post.
cheers!
Neeraj

Hi Neeraj,
I will take care of that.
BTW,
here is link which mentions "Back-of-the-envelope calculations suggest that IRB could collect Rs. 20,000 crore in toll by the end of 2020"

O ok..thnx Sameer. IRB is not in my watchlist..
cheers!
Neeraj

How do you insert tables / statements / excel sheets in blogs (blogspot.com)?

Hi anonymous,
blogger allows only picture files yaar..no tables/excel..so i have to make picture files out of everything.. :-(
Neeraj

What are your views on nhai tax free bonds?

Hi Anonymous,
I think nhai/pfc is a pretty good option for sum1 wanting to put money in debt.
cheers!
Neeraj

After reading your post, i instructed my office fellow to buy few of their pens and send them across to you as gifts. But they are not available. So i will be waiting for similar stock story of another company from your side.

Best wishes for the N Yr.